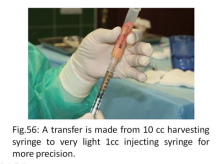 The very first documented fat transfer or fat grafting was performed in 1895 by German doctor, Dr. Karl Czerny, who transplanted fatty tissue from the patient’s lumbar region, or lower back, to a breast defect.

In 1984, Mel Bircoll M.D. introduced a new method of fat grafting, the micro injection of fat, using liposuction techniques introduced in 1980 by French Plastic surgeons Yves Gerard Illouz and Pierre Fournier, and for nearly 10 years, fat grafting remained an accepted adjuvant technique in helping to treat numerous conditions, by augmenting thin soft tissues in plastic, reconstructive and aesthetic surgery. The results were incomplete, not lasting with important bruising and swelling and a constant need of touch-ups. The plastic surgeons used it as an adjuvant procedure during surgery, but unfortunatelly the outcomes did not change and bruising and long lasting swelling discouraged the patients asking for non surgical face lift with only fat grafting without a scalpel.

This is why in the Cosmetic field, Fat Grafting or Fat Transfer is still controversial, due to short time effect and often lumpy results which require several touch-ups.

This 14 year-old technique could be called an “Ultimate fat grafting with Ultimate longevity”, FAMI™ brings the fat transplant in contact with the best vascularized tissue of the face (muscles) and skull (periosteum), raising the life span of the transplant to virtually a life time.

Dr Amar´s scholars are experts in injecting the 30 muscles of the facial expression with patented instruments, respecting venous and lymphatic vascularization. The bruising could be present in some small areas and the swelling very short. Thank to the very precise anatomical natural correction and the long lasting effect, FAMI™ technique does not need any touching up in the postoperative time.
We put this FAMI™ technique in the category of fat grafting, but pure fat is no more injected! In FAMI™ Dr Roger Amar is using since 1998 the stromal vascular fraction of the lower body fat deposits (SVF). The lower body is the source of everyoung tissues with adipose Stem Cells. For many doctors FAMI™ stands now for facial autologous mesenchymal integration which emphasizes the mesenchymal pluripotent cells of this process.